We moved this past year. My husband retired and we decided to relocate. We moved to a new house with new neighbors, in a new town and found a new church.

It has been about a year and we still feel unsettled.  We feel a longing to be known.

To have someone look at us with eyes of recognition. To know our names and ask about our kids.

I long for community.

…To have people know my name and ever so much more,

…To know I enjoy music and art, taking walks, a good cup of tea and auctions.

…That I have a sense of humor, am a pretty good cook and can be a fiercely loyal friend if given the chance.

I want them to know my heart aches from old wounds and some not so old. Things you can’t blurt out when you are just getting to know someone. It takes time…lots of time.

So, as I struggle to fit into our new community, I look expectantly to someday heaven. It will be a place of perfect acceptance, a place without longing.

I’ve been told a place is being prepared. (John 14:1-3) A just right place, a perfect place, a belonging place that isn’t uncomfortable. A place without an awkward adjustment period.

I imagine being greeted with a bear hug by the God who was unapproachable and untouchable in the Old Testament accounts. (*see below) Now he has promised to wipe away my tears. (Revelation 21:4)

I will be immediately known and loved. Not because I am good, but because I belong to a great King who purchased my freedom at an awful price. (I Peter 1:18 & 19)

He saved me even knowing who I would be and what I would do. Loved me in spite of all of it. Why? For a purpose, to worship and serve Him.

He will integrate me seamlessly into the heavenly community; giving me a job that suits just me. One where I can contribute and feel helpful.

He will delight that I am there, at home with Him. At home with the one who has loved me since the foundation of the world. (Matthew 25:34)

And all of this will fade away. For I will be home at last. 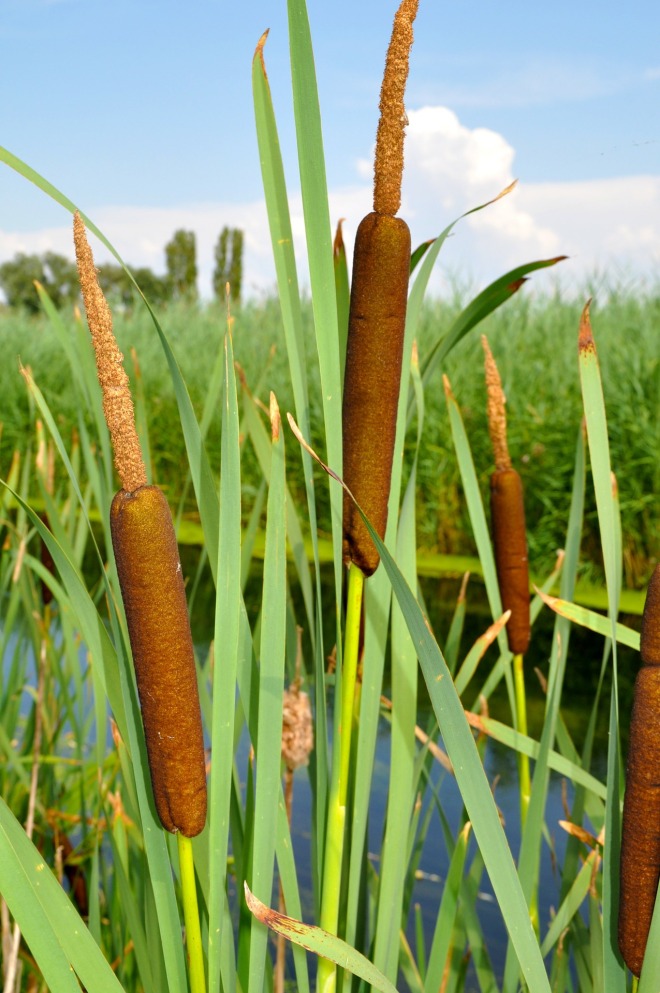 That’s all it took for my dad to stop the car, get out his pocket knife, and traipse down into the ditch to collect some cattails for my mom. He would climb back up the bank with a big handful clutched in his farmer hands.

They both smiled all the way home.

My dad loved to see Mom smile and so time and time again he would stop the car, without being asked, when he spotted them.

It all came back to me last week. We had been frantically looking for a house. Our moving day was just three weeks away. We were scheduled to see two more houses. One we had seen before and although not right we thought we could somehow make it work. Our son-in-law had pointed the second one out to us and we were hoping it would be a better fit.

After puzzling at the first house we moved on to house number two. We went through the front door. My husband continued on through the house while my daughter, Anna, and I stood in the entryway. We looked here and there without moving from the spot. Finally Anna said, “Well, I don’t have to see anymore. This is it.” I agreed. It felt like home. We decided to move from room to room. Nothing surprised or disappointed us. We found what we were expecting to find in each room, only more.

If there was any doubt, it was completely removed when coming through the kitchen I looked out the window.

There on the lot line was a ditch…with cattails.

I smiled all the way home.

“You have given him his heart’s desire, And You have not withheld the request of his lips. For you meet him with the blessings of good things;” Psalm 21:1-2a

He built most of it himself. It was a strong sturdy house with white siding and green trim. It started out as just four rooms. It was what they could afford. His brother, Clarence, helped him lay a basement foundation and then the new part of the house was built while we lived in the old part.

Electrical work, plumbing, windows. He did it all himself. One of the few things he hired out was a carpenter to make custom cabinets for Mom’s kitchen.

Dad rescued wooden floors from an old school that the city was taking down. He carefully refinished the wood and covered the floors in the living room, dining room, and all of the upstairs. He made the stairs extra wide which made it easier for us to slide down on our bottoms. I tried it once when I was older and nearly killed myself.

There was an old garage and a small shed on the ten acre property. The front yard was full of big shade trees. The old cottonwood was an especially fine specimen. My two sisters and I would try and grab hands around it. We could never quite grasp each other’s fingers.  There were two good climbing trees. We spent many hours reading books and eating lunch in them. I would often climb the one closest to the road to watch for my Father’s car as he made his way home from work.

My father carefully planted a shelterbelt made up of a row of evergreens, a row of Chokecherries, and another of plumbs. He added Nanking cherries a few years later. The plowed garden was about two acres. There was a strawberry patch, raspberry plants, and an apple tree with many varieties of apples grafted onto it. My dad was especially proud of the apple tree. He had done the grafting himself. It was a sight to behold when it was in bloom and later, when the fruit was heavy in its branches. He planted rows of corn. More than we could ever eat or freeze, but he liked to give it away. He started studying Gurney’s seed catalogue in the winter and ordered in plenty of time for planting. He usually started the tomatoes and Mom’s zinnias inside. The rest of the seeds he planted in the garden with us reluctantly helping.

The ditches were full of wild roses and white anemones. In the spring they were full of water which meant we could sail up and down on homemade rafts. If it was especially wet the side yard became a pond for a few short days.

There was a small patch of bushes that we called woods. We made an animal trap in a hollowed out spot. We crisscrossed branches and covered it with leaves. Of course we never caught anything, but we checked it often.

We had a big backyard where we played kick the can when church kids came over.

There was a well-worn path that led to the neighbor’s house. He was a widower that watched our dog when we went out of town. We imagined he was sweet on our grandma, but nothing ever came of it. He had a couple good climbing trees that he allowed us to use when we wanted. He also had some metal bars that we would swing on or hang from by our knees.

The winter brought storms which lasted a few days instead of a few hours. After shoveling we were rewarded with high snowbanks for building caves and forts. We would jump off the neighbor’s barn into deep drifts when the conditions were right. On occasion the garden became a skating rink. I imagined I was an Olympic racer.

It was a magical place full of imagination and memories. Now it was gone, replaced by a tangle of roads and buildings. They call it an Industrial park. Doesn’t look like much of a park to me.  I tried to hide my wet eyes from my granddaughter who was happily playing in the back seat. I so wanted to show it to her as it had been…but it was all gone. Not a hint remained of what had been. And I grieved.

I can’t shake the sadness…these emotions that well up. I was trying to find some link to my past…some proof that we had lived there. That my father had built a good life for us there. That we had been happy and safe.  Instead I found progress…I can’t see it improves things. When fields and gardens and climbing trees are wiped out for the sake of an industrial park.

But I think it is more than that. We are, after all, eternal beings. God made us to live forever and when things are ruined or don’t last an aching sadness sets in. This is not how it is supposed to be. Someday it will be different.

“For we know that if the earthly tent which is our house is torn down, we have a building from God, a house not made with hands, eternal in the heavens.” 2 Cor. 5:1

I take comfort in the fact that what my heavenly Father is working on will last for eternity. When He calls me home it will really be home. He will be my home.

Deuteronomy 33:27 The eternal God is a dwelling place, and underneath are the everlasting arms;